Linking quarries and their surroundings by restoration ecology for aquatic mammals
St, 11/05/2016 - 12:48

The first survey confirmed the presence of otters, not only in the lagoon system of the quarry but also in several of the sampled areas in the Duero River and the irrigation channel. To our surprise and delight, the camera traps pictures showed that otters are breeding in the Middle lagoon. Also, we have been able to photograph an otter, probably a male, in both the Middle and the Northern lagoons.
Male otters are territorial and usually control a river section up to 30 km long, where can live and breed several females. The length of the male territory depends on the habitat quality, mainly regarding to prey and shelter abundance. Out of the breeding season, otters are solitary animals, so observation of several individuals together is uncommon.
Is the solitary otter individual photographed in the lagoons a male patrolling his territory or are they two different males? How far from the quarry gets the territory of the male(s)? Are there more than one otter female breeding in the gravel? Once the male otter cubs get around 10 month old, they will have to move into new territories, when that time comes, which is the most suitable habitat for this new otter generation?
The genetic analysis of the otter droppings will allow us to answer the aforementioned and many other interesting questions, which will help us to study, understand, manage and improve the habitat quality of the quarry lagoon system and its connectivity with its surroundings. 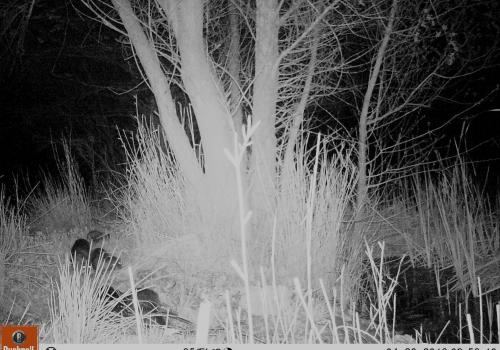