Snow currently covered our hives (A) and the bees created winter cluster. But inside this cluster the temperature is rather high. In January, when the queen starts to lay first eggs, the colony increases the temperature at its central part to 35°C. Bees continually eat the honey and produce heat by vibrating their abdomens or wing muscles, allowing them to use these muscles without actually moving their wings. The difference between the colony centre and air temperature may be higher than 40–50°C. And the bee colony still consumes only one kilogram of honey per month. Bees continually move. Outer parts of the cluster have only around 10°C. The colony uses very efficient thermal recuperation. No bee freezes at the edge of the colony, because cold individuals migrate slowly back inside the cluster.

When we opened the hives during oxalic acid treatment (B) and looked vertically inside by infrared camera, we clearly saw the distribution of the bee colony. Warm lines between frames had from white to orange colour while the surrounding cold area was dark blue. Our bees occupied 7-9 lines (C), which means they are in a good condition. We also found one hive with unusual situation (D). The colony was divided to two opposite corners. The colony has probably two queens – one old and one young from late summer, which still tolerate her mother. Such hive will have a fast spring development, but survival of the two queens for a longer time is not probable. 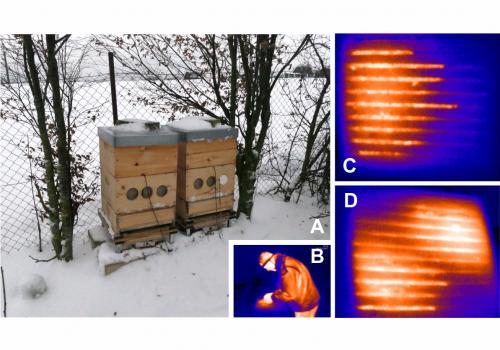