Each locality has two circles – the smaller circle is in a distance of 500 m from our future hives, while the larger one is in a distance of 1000 m. They represent area which is easy (or efficient) to access and collect nectar and pollen grains by our bees. Even through a range of honey bees can be about 3 km (some sources mention the range to 10 km), the nectar production must be very rich in such distance and the efficiency of honey production is much lower.

The surrounding area of the Mokrá quarry has relatively small proportion of species rich grasslands and shrublands. Prevailed part of the area is aforested. Forests produce rather low amount of nectar, but they are known as a source of honeydew, which may be important forage for some insects (including honey bees). Some part is represented by the mining area, where only few plants in low densities occur.

Two other reference localities are rather different. Hády is an abandoned quarry with species rich flora and many different habitats. Lažánky is small rural village surrounded by large arable fields with intensive agriculture. 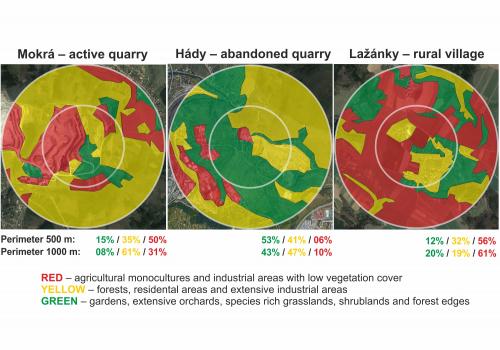