Each hive in the Czech Republic must have a hive bottom board with Varroa screened trap (A). It accumulates all debris with remnants of wax, pollen, died bees and varroa mites. The debris collected during one month is stored to some small box (B) and it must be sent to the certified laboratory for official veterinary examination.

Beekeeping in the Czech Republic is frequently practiced agricultural activity, which is regulated by several laws. Beekeepers must have at least some necessary information about the health of their bees, because ignoring the health care of bees on one stand may negatively affect the health of other bee colonies in wide surroundings. All beekeepers in the Czech Republic have to examine the level of Varroa mite (C) infestation in February and if the number of Varroa individuals exceeds some threshold, they have to treat all bees at the stand during early spring.

PS: The board on our photograph (A) contains yellow and brown stripes. Do you know why it has different colour? Yellow stripes are from wax debris coming from new frames built in last year, while brown stripes are wax debris from old frames, where several generations of brood were breed. 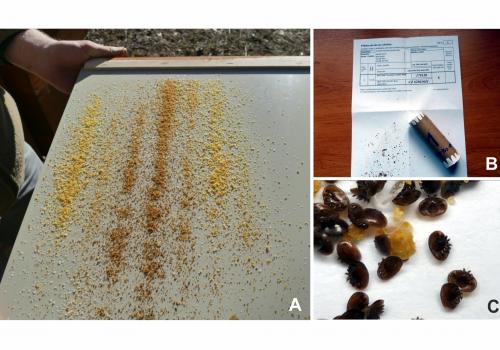