The Romont quarry has been operated by the CBR Company since 1973, extracting Maastricht tufa, chalks of various colours and silt used at the associated cement works at Lixhe. It provides this factory with 1,600,000 tons annually of raw materials to supply a "dry process" kiln producing 1,400,000 t of clinker a year.

The deposit covers 550 hectares, 330 of which are in the Walloon region. There are 230 million tons of chalks and tufa available on the site if the surface is fully worked down to 65m. The extraction zone and its extension presently cover 230 hectares.

Geology of the site

The marine Cretaceous formations of chalks (Campanian) and tufa (Maastrichtian) worked at the Romont quarry are overlaid by several metres of Tertiary marine sands (Oligocene, Tongrian) and continental formations (Quaternary), old Meuse river terraces and finally from one to a few metres of loess.

There are many solution pockets at the top of the chalk; these contain greater thicknesses of post-Cretaceous sediments.

The Cretaceous formations are naturally calcareous, and the other underlying formations are siliceous. Although naturally fairly rich in minerals, these later formations are susceptible to washing, giving acid surface soils (Brouhîre d'Emael, Thier à la tombe, etc). This acidification takes time to develop, hence the ecological value of acid areas in good condition in their natural location.

The Romont quarry is located entirely in high-quality cultivated land, in a district where 79.5% of the surface is used for agriculture.

The agricultural rehabilitation of the Romont quarry: levelling the sterile surface at the bottom of the quarry, covering it with an arable layer at least 30 cm deep, tilling and fertilising it and returning it to use. After working and recovery, these areas are handed over to agricultural workers.

The work completed so far has restored an area of 30 ha of arable land.

The western and eastern edges (along RN 671) have presently been reprofiled. Trees have been planted to provide two buffer zones.

➢ along the wood located to the east of Eben

➢ along the RN 671 beside the road (south-western sides of the sterile soil tip) as well on the sides opening onto the quarry (south-east of the roundabout). The most recent plantings consist of much more varied native varieties (ash, maple, hornbeam, etc.), with a shrub layer of hawthorn (Crataegus monogyna), dog rose (Rosa canina), red guelder rose (Viburnum opulus), common dogwood (Cornus sanguinea,) etc. They also contain evergreens (Thuya occidentalis) to provide a permanent screen between the village of Eben Emaël and the quarry.

These are on the present north-eastern edge of the quarry, to the north of the village of Eben on the old orchards and gardens, and on agricultural land. These stands of trees should extend northwards along with the workings.

Alongside these completed developments, there is a mound of sterile soil (Butte de Romont heap) that was created during the early years of the quarry workings to the south west of the site. This mound, with an area of about 22 hectares, with a height difference of over 30 metres, will eventually be levelled and replaced by new soil for cultivation.

A small orchard with a few standard varieties of fruit trees has also been planted on the meadow to the north of the quarry staff car park, just behind the powder store.

There are currently at least 19 different habitats on the quarry.

In order of surface areas, these are:

"Biodiversity" projects developed at the site: 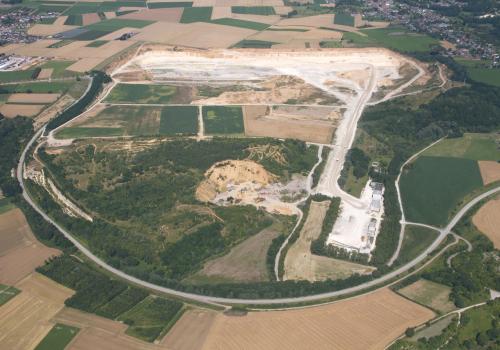